Now independent creative professionals are giving some love to these same capabilities that allow them to design amazing visuals wherever they go, thanks to powerful NVIDIA RTX Studio laptops and mobile workstations.

Filmmaker Hasraf “HaZ” Dulull writes, directs and produces TV, film and animation projects. He’s worked on titles such as indie sci-fi film The Beyond on Netflix, and directed episodes for Disney’s Fast Layne miniseries. More recently, he’s been working on Battlesuit, a pilot episode for an animated series based on the graphic novel Theory.

When I saw the quality of real-time visuals, I thought to myself: with a little love, real-time ray tracing, and a powerful RTX GPU, you can make really cool animated content at a cinematic level.
—  HaZ Dulull, filmmaker

With only four months and a small team to put this project together, Dulull used a Quadro RTX-powered Razer Blade 15 Studio Edition laptop to harness the power of real-time ray tracing and produce the entire animated episode in Unreal Engine.

Dulull’s main workspace is his home studio, which he also uses to connect to his team remotely. But for the pilot, he needed something compact that still delivered impressive graphics power and allowed him to use virtual production filmmaking techniques for his animations. One scene required a gripping action sequence, so Dulull used DragonFly by Glassbox as a virtual camera. Built for Unreal Engine, DragonFly allowed Dulull to take the animations he receives from his team and quickly shoot different takes to achieve the final result.

DragonFly is directly connected via Wi-Fi to his Razer laptop, where the animations are playing back in real time and being streamed to his camera viewport.

Dulull constantly pushed the laptop with scenes that included demanding amounts of geometry, effects and lighting. A standard VFX shot is composed of 100 frames, but some of Dulull’s scenes were up to 700 frames long. With the Quadro RTX, he employed real-time rendering and produced final graphics in Unreal Engine.

“Traditional CGI animation can be expensive because it includes multiple workflow steps in the process, including rendering several passes and compositing them afterwards,” said Dulull. “But with the Quadro RTX, I was able to use real-time rendering and create every single shot with final pixels in Unreal Engine. There was no need for compositing or post-processing, apart from color grading, because what you see is what you get.”

More Time for Style and Iterations

When working on a proof of concept or a pilot like Battlesuit, filmmakers need to get the animations and graphics to a level that is acceptable for networks and studios. Traditionally, teams will create storyboards or mockups to get an idea of what the style of the project will look like.

But with GPU ray tracing, filmmakers can find the style in real time. For Battlesuit, Dulull went into Unreal Engine and explored different styles on his own. He didn’t need to rely on other artists to create shaders or mood boards, or to send notes or comments back and forth.

“While we’re in the film, we were able to play around with style and find the look we wanted to go for,” said Dulull. “It was easy to explore and change the look in real time, and this is only possible through NVIDIA GPUs.” 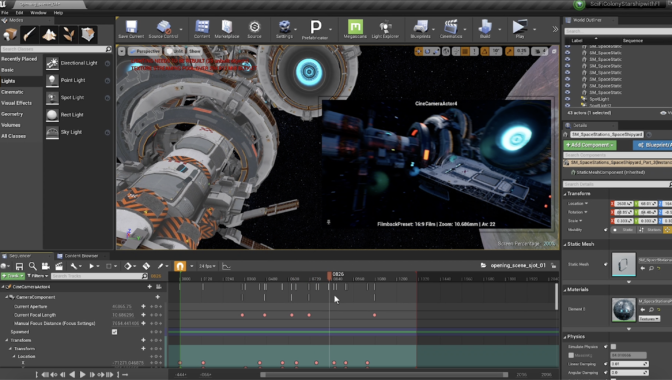 The ability to make changes quickly also allowed Dulull to iterate as much as he wanted, since he didn’t have to wait for scenes or images to render. He could make revisions and tweak shots up until the final product was delivered.

With the power of real-time ray tracing at his fingertips, Dulull could push the graphic quality as far as he wanted to quickly achieve the animated film he envisioned without making any creative compromises.

Battlesuit is available to watch here.

Learn more about Quadro RTX and other NVIDIA solutions that are helping professionals work from home.