It wasn’t too long ago when the world had no idea what a mobile app was, but that day is long gone. Now, there are more apps than ever. Global consumer spending in mobile apps reached a record $133 billion in 2021, and that trend is only growing.

There’s an obvious reason for this: consumers spent a staggering 90% of their time on mobile apps in 2021. The average consumer spends hours a day on a mobile app. In other words: creating an app can be big business, whether you are a bootstrapped startup or an established organization.

The market is open to new and innovative mobile apps that can eventually shape our future. When Uber first emerged, many dismissed it as a mobile app that wouldn’t gain much traction. Years later, it’s clear that doubting Uber would be a massive mistake: the company is now valued at around $90 billion dollars. But how exactly does someone end up getting funding for their app?

You might be excited about your new app idea and what it can do for its users, and also interested to see how the market accepts it. However, there’s one main issue: it can be a difficult journey from coming up with an app idea until finally launching a successful app. If you want to raise money for your app, there is much work to be done.

First and foremost, you have to make sure that your idea for an app is unique. If you decide that you want to create a dating app, you should recognize that millions of people worldwide use dating apps regularly. What makes your app unique, and what are the selling points or features that rel=”nofollow”will help users become excited about the app? Of course, the way you plan on designing and branding your app is critical here.

Even though you may believe that your app is unique, you might find that this isn’t the case whatsoever. This is why market research is so fundamental: you can find out more about your competition, how established they are, what’s working, and relevant trends that may affect your app’s industry or niche. This step is quite simple: you find out whether there’s a market for your app or not.

Once this is established, it’s time to summarize why your app will be successful. The best way to do this is to create a presentation or pitch deck to describe your app, its features, and why it’s a viable business idea. The presentation or pitch deck should also detail how much money you will need to succeed, projected revenue, the problems you’re solving, the app’s business model, and target demographics.

Once this is created, you will have the last factor necessary for investors: a detailed roadmap explaining how much money you need.

In summary, here are the factors that should be understood before searching for investment in your mobile app:

1. Your app is unique (and/or branded well).
2. You’ve done the market research, and your app has a product-market fit.
3. You’ve developed a presentation AND elevator pitch.
4. You know how much money you need, and why you need that money.

Now that you understand the critical factors to getting mobile app investors, you must consider how it will be funded. You might have an incredible vision for an app, but you will need to decide how exactly it will be funded if you want it to succeed. How much equity are you willing to offer, and for what amount of money?

The first option is straightforward: you can bootstrap your mobile app. Bootstrapping is only an option if you are someone who already has the money to fund your mobile app and plan on dedicating your time to making sure that it succeeds. This could be a smart decision if you can fund your app without jeopardizing your financial future.

Second, you’ll want to start with the people closest to you. You may have a wealthy family member who supports your mobile app and is actively interested in investing in it. Others might not have a family member but a friend willing to invest in your app. One reason why so many people look to their personal network to fund their app is that friends and family members genuinely support them and may not need the “elevator pitch” as a stranger would.

Third, anyone who comes up with an app can also look to crowdfunding platforms to help fund their mobile app. There are various platforms like Crowdrise and SeedInvest where it’s possible for you to obtain enough funding to end up scaling your app into a thriving business. Kickstarter and Indiegogo might be a better option for those who think that a donation-based platform makes more sense.

Fourth, angel investor funding and seed funding are a common way for mobile apps to be funded. Venture capitalists may ask for more control regarding their investment, but they can also be crucial for future growth. If your app is already gaining traction but needs several million dollars to get to the next level, seed funding may be the logical solution.

A bank loan is a fifth way to fund your mobile app. It should be noted that banks often do not provide loans to fund mobile apps, so this may be more of a “long shot” when compared to the other funding options.

As an overview, here are the five main ways to fund a mobile app:

Let’s say that you’ve come up with an incredible idea for an app, and the market is already loving it. You’re gaining thousands of users per day, but it’s also clear that you are in over your head because the app is growing so quickly. You KNOW that you need to attract investor money, but you’re also worried about how your pitch deck or presentation should look.

Here are some of the top 5 pitch decks created for a mobile app. You will probably recognize most of these apps, and we’ll look at why their pitch deck was successful. We will be examining the pitch decks of Airbnb, Linkedin, Foursquare, Mixpanel, 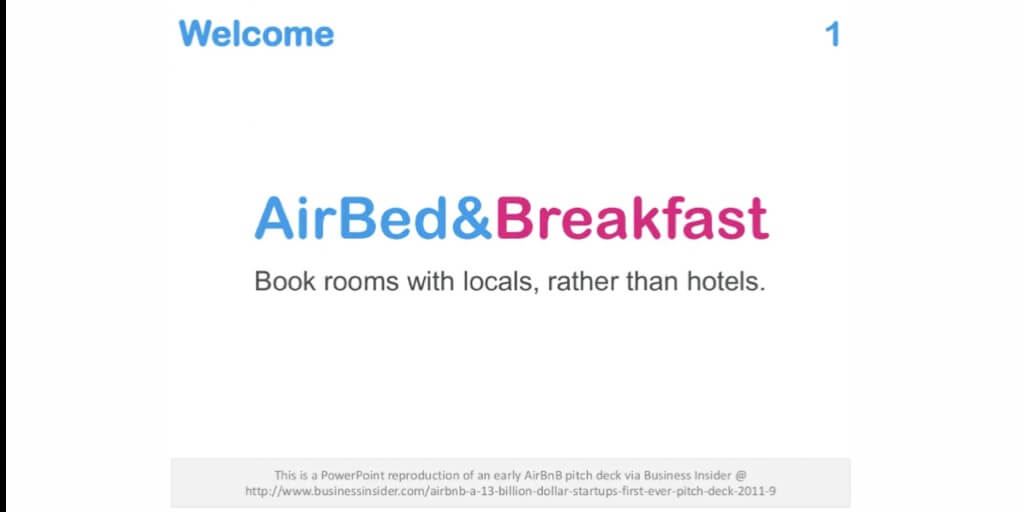 Airbnb is one of the most successful startups in recent history, and it all started with a legendary pitch deck. What’s the lesson here? Airbnb’s pitch deck is so praised because it’s incredibly straightforward.

The intro to the company is so effective because anyone can immediately grasp it: “Book rooms with locals, rather than hotels.” It describes the business so that a 5-year old could understand it. 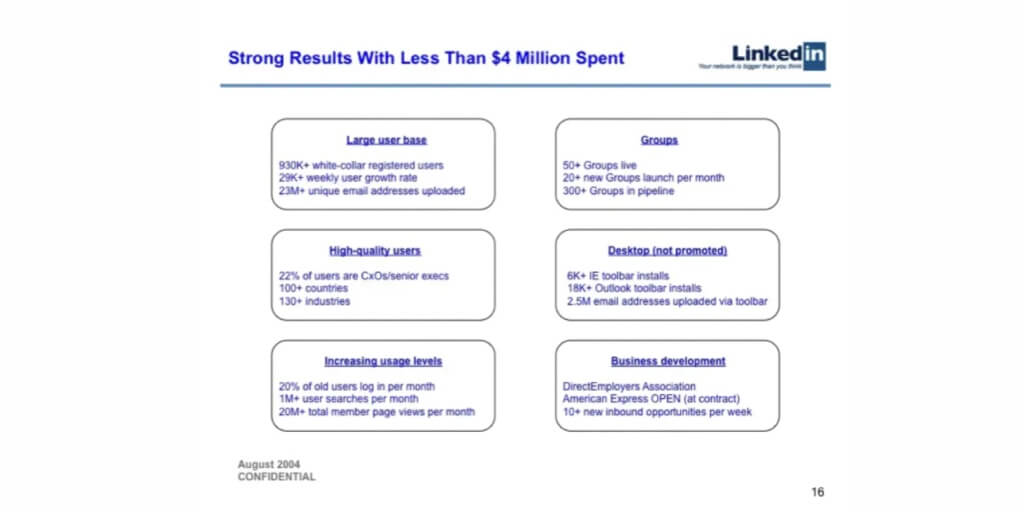 Linkedin was founded in 2002, and there’s a good chance that you’re on Linkedin. It’s the largest professional social network in the world, and it had an impressive pitch deck for investors. Linkedin was eventually sold to Microsoft for over $26 billion dollars.

One of the most compelling aspects of Linkedin’s pitch deck is that it details what’s ALREADY working. They explain in detail how they spent $4 million, and also how it led to impressive results. It isn’t hard to see that this can make investors curious about how much the company would grow if THEY invested. 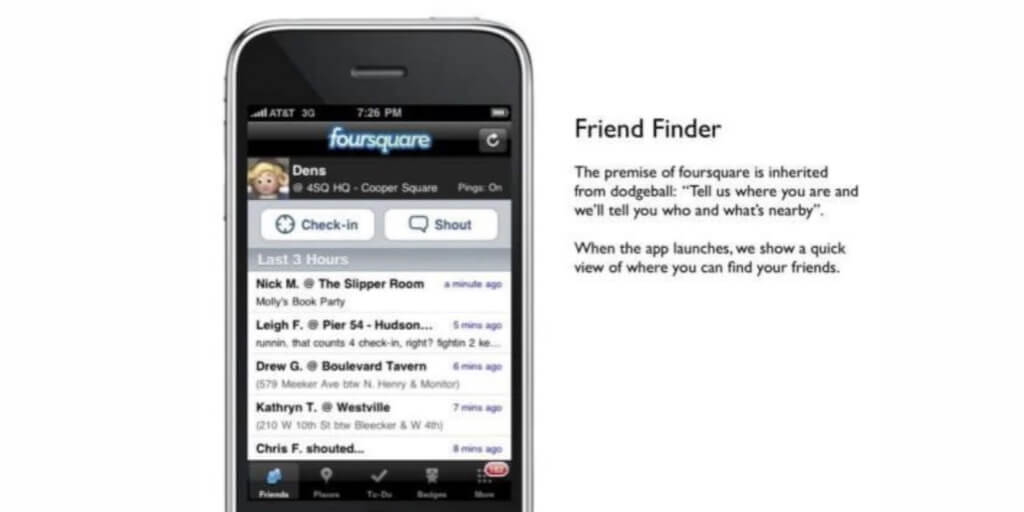 Foursquare is an app that helps individuals find local places to check out and is often called a “location data platform.” The company has over 50 million active users.

What’s the big deal about Foursquare’s pitch deck? It emphasizes the importance of visuals. Every slide, there’s a visual communicating additional information about the company. Investors often want to get a “picture” of what’s going on rather than simply reading text – even if the text is effective. Here, you get to see the app features “in action.” 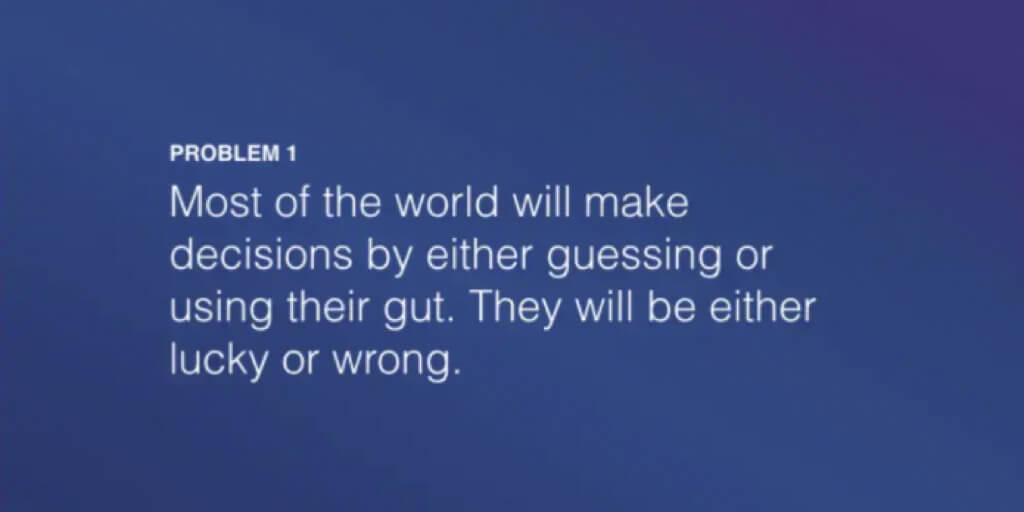 The beauty of Mixpanel’s pitch deck isn’t that it has a lot of graphs, numbers, or details. It’s that it tells a story: there’s a massive data gap issue, and Mixpanel hopes to bridge that gap and capitalize on it. Instead of guessing your analytics, Mixpanel can offer concrete data. 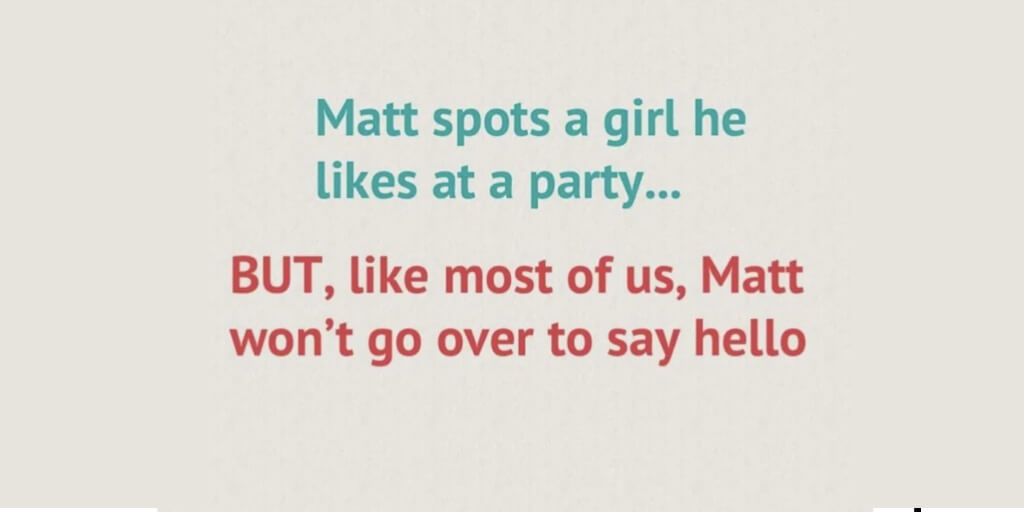 Did you know that Tinder wasn’t always named Tinder? The dating app giant was once known as “Matchbox.” Now, Tinder has somewhere around 75 million active users. At one point, it was another app trying to raise money to attract more users.

What’s interesting about the pitch deck for Matchbox? It doesn’t have graphs, tables, or competitor research. Instead, it tells a very simple story about a man named Matt who is interested in a woman at a party, but is scared to approach her. The story is relatable, and the fact that Matchbox can solve that universal problem helped the pitch deck drive its points home.

We hope that this guide has been helpful and that you’ve gathered some insight about how to go about raising money for your mobile app. Here are some frequently asked questions regarding mobile app funding that you may want to consider.

What’s some additional funding advice that I can benefit from?

If you want to raise money, you will need to know your facts. This isn’t just about knowing your app’s best features or its main marketing slogan. You should also know numbers regarding data, users, your demographic, competitors, your business model, and more. The more data you can offer, the more knowledgeable you seem to a potential investor.

There are other things you can do to help your chances for getting funding. You should try to network to the point where you can, at some point, have a conversation with someone with experience getting funding. A mentor can go a long way towards improving your network, but they can also help you secure funding.

What else should I know about pitch decks?

One of the most important things to remember is that you might need different investors at various stages. Determine what stage your app or company is in, and it will help narrow down the future funding type you will need. You shouldn’t even think about a pitch deck until you understand EXACTLY where you are as a business.

Also, be realistic about projections and revenue in your pitch deck. No investor wants to feel like they are being misled, and it’s much better to underpromise and overdeliver.

What do I do when they say no?

You have to understand that not every investor will be interested in your app. They might doubt that the market will validate your idea or feel like you’re not the right person to launch the app. Other investors might be worried about a conflict of interest, because they invested in a potential competitor.

You should be prepared for rejection, never take it personally, and recognize that you won’t appeal to every investor. Instead, if rejected – the best approach can often be to calmly and politely ask for feedback and guidance.